Specialized software is required to stack the original images.

An example is shown below with the photos of the 4.7 Meg ohm resistors. The first photo shows 4 out of a total 66 photos that were taken. After a photo is taken, the focus point is moved slightly before taking the next photo. The first of the four shows the dark blue ring is in focus, while the final of the four shows the brown ring is in focus. After processing all 66 images, a single image is obtained that has an equivalent depth-of-field of the entire subject being photographed. 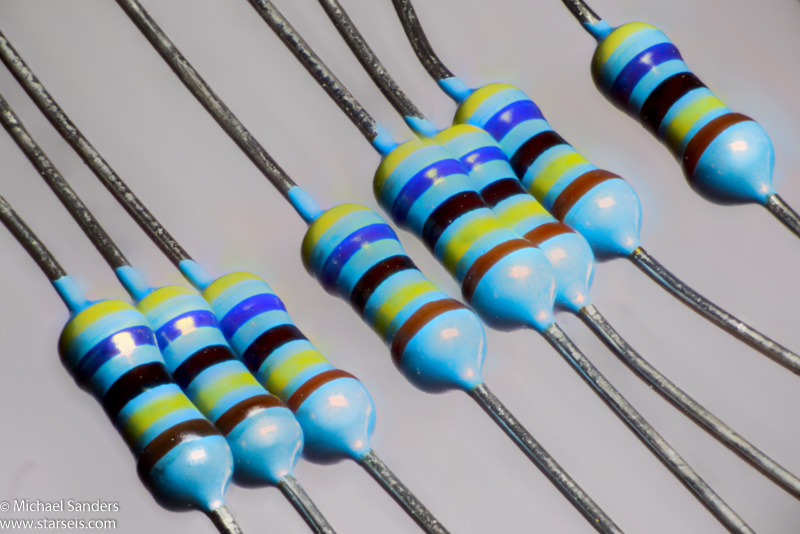 There are two ways to change the focus distance between each photo. The first way is to simply rotate the focus ring on the lens slightly, and the second way is to move the camera slightly (either forward or backward). In both methods, the subject is kept stationary. These methods are each discussed below.

1. Rotate the Focus ring on the camera.

This is the easiest method, since it can be done without any extra equipment. It can either be done manually, or with specialized camera control software to do this automatically. One advantage of using camera control software to change the focus is that you don't have to touch either the camera or the subject, so everything is rock solid and all the photos should be perfectly aligned.

Apparently this is the best method, since the input images are better matched for the focus stacking processing.

I first tried using a Manfrotto 454 Micrometric Positioning Slider, however, this wasn't too successful. The problem with this device, is that it isn't a precision device and there was too much slop in the mechanism meaning that every successive photo had a slightly different orientation than the previous photo.

Later I purchased a Proxxon KT-70 mico-compound table and this gave way better results. The Proxxon table is used for drilling precision holes with an electric drill, so is not designed to be used as photographic equipment, but it does the job. I bolted to KT-70 to a block of wood, then just sat the camera on top of the KT-70 table. Although it may be better to solidly attach the camera to the table, it seems to work good enough just sitting it on top. Originally, I had made a mounting device using several L-brackets so the camera was <apparently> solidly attached, however, it was easy to induce micro-vibrations of the camera which would take 5 to 10 secs to settle down. With the camera sitting directly on the table, micro-vibrations were not an issue. On the second photo below, note the 2 kgm counterweight from my telescope sitting on the wood base to help stabilize everything.

Each rotation of the wheel on the KT-70 table moves the camera by 1.0 mm. In the resistor photos shown above, the table was move 1/4 turn or 0.25 mm between each photo. 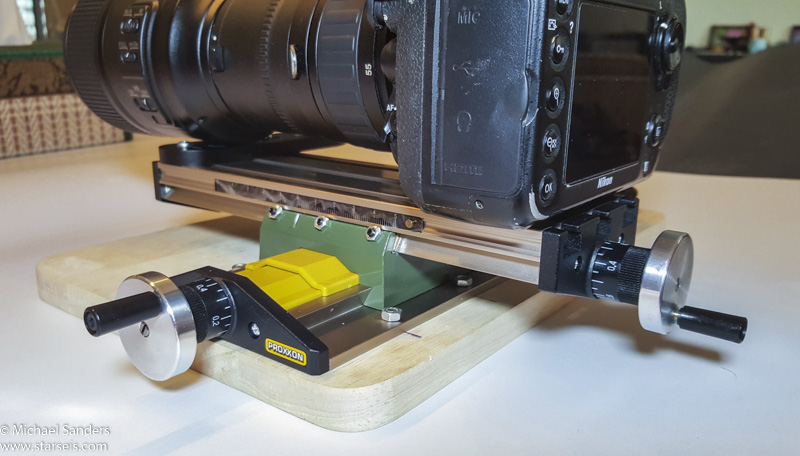 Some suggestions for best results.

A google search on the topic should reveal several options. When I first looked into this several years ago, I tried all the ones I found, but ultimately settled on Zerene Stacker. I cant remember all the pros and cons, but I guess that Zerene Stacker must have given the best results. Zerene Stacker does some alignment prior to stacking so is able to compensate for small amounts of camera movement between shots.

Zerene Stacker can be found at http://www.zerenesystems.com/